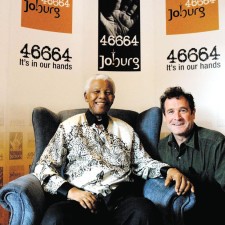 “After singing the national anthem for the crowds at Wanderers Stadium, where the Proteas and the Boks were playing a friendly game of cricket for charity in memory of Nelson Mandela, the following thoughts came to me about this complex South African icon and Zeitgeist.

I think his legacy is a set of ideas which he not only believed but enacted. What I can recall is this:

1. He made the geographical space of South Africa a redemptive space. That is a space in which all South Africans, good and bad, lost and found, old and new, male and female, traditional and modern could be redeemed. Redemption is when you hand over your old self, with all its failings, faults and unsavoury deeds and admit to them and in doing so, you receive the chance of creating a new one, a redeemed one, one in which you can explore a new life with a certain amount of freedom and honesty. Out of this came the Truth and Reconciliation commission, a South African invention exported to Ireland and Argentina;

2. He is the only African president to serve one full term and while knowing that his second term was guaranteed, he decided to hand over power willingly and graciously to the next incumbent. This was a powerful statement to his own party leadership, the international community and to all leaders of a future South Africa. Democratic Politics are legitimized, revitalized and made new by these kinds of acts;

3. He was strong in his convictions and when his internal compass identified injustice he acted. He spoke out against his own party when they descended into Aids denialism. He launched a powerful international platform using his prison number 46664 as a basis to rally support and change the tide against a ruling party who had lost the plot;

4. He suffered greatly in his personal life but gathered himself and in his broken parts became stronger;

5. He broke bread with his enemies and transformed them;

6. He sang and danced when the occasion arose and made ordinary people feel special and cared for;

7. He displayed humility and was always polite but had the requisite forcefulness and steel when entering a contested arena;

8. Finally, when he spoke to you, you felt that all his attention was on you and what you said to him was being noted and seriously considered. A gifted listener and a dedicated midwife that brought a new struggling infant South Africa into the world.

With love on the journey,