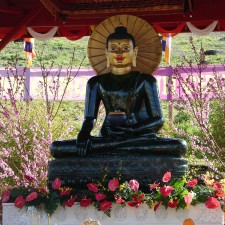 Several years ago I was fortunate enough to visit the Jade Buddha for Universal Peace at the Phap Vuong Buddhist Monastery in Escondido, CA as it was beginning its worldwide tour. As I looked through old photographs that I had taken of it, I started to remember my experiences there. I spent some time speaking with Ian Green, director of The Great Stupa of Universal Compassion in Australia and the man responsible for bringing the Buddha and its world tour to conception. Mr. Green relayed to me some of the details about the Buddha, which is a remarkable work of art. He told me that the jade was cut from a boulder in Canada near the Yukon border using specialized diamond saws. The jade is a rare, gem-quality Polar Jade and was carved by skilled craftsmen and women in Thailand. The Buddha stands 2.5 meters (8 feet) high and weighs 4.5 tons. I was mesmerized by the Buddha and could not take my eyes off of the incredible translucence of the jade. The Buddha’s face is exquisite, and I learned later from Mr. Green that it is painted in pure gold, which is a common tradition in the Buddhist faith.

Yet, for all of the splendid beauty of the Jade Buddha, what struck me even more about it was its presence. Standing with it, one could feel a deep sense of peace and aliveness. I noticed that large flocks of birds gathered in nearby trees and squirrels danced and played in the surrounding hills. I watched people come and go at the monastery and I saw many different reactions to the Buddha as it stood there- unwavering- and smiling down on us. Some people dropped immediately into deep prayer, some stood weeping and hugging their family members; one woman even called out to the Buddha in her grief. These moments touched me deeply and I was aware of the waves of vibrant, shared energy pouring in and out of the people, plants, and animals as we all stood in communion with the Buddha. My personal reaction was a profound sense of joy, expansion, and elation. The deep presence of the Buddha brought me into deeper presence within myself, and it brought me a renewed sense of the goodness in humanity, which is something I needed at the time.

As I left the monastery, I contemplated the energies that were in and around the Buddha and I pondered the idea of presence. That is, I wondered exactly what created such real presence in this seemingly inanimate object? My thoughts went to ceremonies and consecrations that were likely held throughout the process of creating the Buddha and I thought about the spirits of the land, plants, and animals in the regions from which the jade was harvested and carved. I thought about the mountain spirits and the spirit of the jade itself and how all of these things are part of the Divine. It is not possible to know all of the details of the ceremonies and blessings that occurred during the Buddha’s production, and the question about what energies are present in the Buddha is probably too big to be adequately answered. But what was apparent to me was that I felt something very real, tangible, and alive in the Buddha. This led me to think about humans and how we are (or are not) present within ourselves and with each other.

When I look back on that day I believe that part of what the Buddha did is that it allowed us all to experience whatever it is we needed to experience in the moments we were with it. The Buddha did not attempt to change our reactions or tell us we were wrong. It did not cringe away from us in discomfort and fear of genuine emotional expression. The Buddha did not gossip with its friends about us or tell us to withdraw our psychological projections upon it. It did not cast judgments about the decisions we make or admonish us to “grow up”. It did not pass notes, share our secrets, tease us, or break its commitments with us. It did not become inflated and make itself superior to the rest of us out of its own sense of envy and inadequacy. It did not use us in an attempt to get ahead in self-serving disregard and arrogance.

Rather, in its stillness, the Jade Buddha allowed us to be in fellowship with Divinity and to realize something about ourselves if we were sensitive enough and willing to hear. This is part of allowing authentic growth processes and traveling inner roads to self-understanding. And it is a great gift not only from the Buddha but also from the embodied and non-embodied beings and energies that travel alongside it and live in it. For me, this gift of presence is one that I aspire to live more fully for myself and others. And I continue to have great reverence for those who, like the Jade Buddha, Earth, and its plant and animal inhabitants, hold presence on my behalf.

With love on the journey,